I rolled my eyes when I first read this story. I was thinking “How full of herself must this woman be to think they modeled a Barbie doll after her?”. Well, then I saw the photo side by side and ate my negative little words. They look identical.

Olivia Mancuso was working as a TV reporter at the same time Mattel released a news anchor version of Barbie. Olivia saw it and thought the doll looked A LOT like her. It was back in 2017 and Olivia wore a certain outfit during one of her reports. It was a purple dress, a blue necklace and nude heels. Then 11 months later and Olivia’s friend sent her a picture of Barbs and stated that she looked an awful lot like her. The doll is wearing the same color dress, a blue necklace and nude heels. She’s also sporting the same long brunette hair, parted on the same side, and identical olive complexion. It’s uncanny, really.

Olivia didn’t just let it go. She tweeted Mattel and they replied with “Incredible style, Olivia!” The good news is Olivia isn’t mad about it. She says that she thinks it’s pretty cool that Barbie looks a lot like her. Check it out for yourself below. 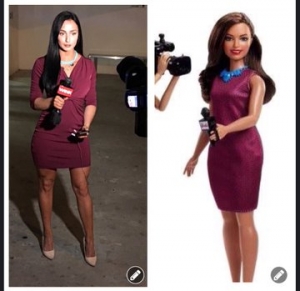 Hailey was having an issue with Bryan, her boyfriend of 6 months. What was the issue? Take a listen below!…

Erie County Exec Kathy D with the latest on COVID 19 in Erie County!

Every Wednesday, Kathy Dahlkemper checks into the show and gives us the latest on what’s happening with Covid in our…

Do you have high blood pressure? If so, this is for you!

Hypertension is BAD news all around. A lot of us have it and need to keep an eye on it….